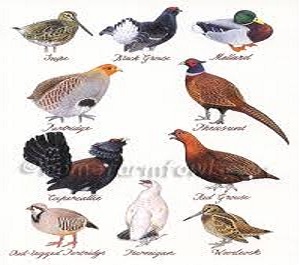 Poultry is divided into a number of different categories and classes. In the olden days, there were a few kinds of poultry, but now with the advancements in technology a number of other classes have emerged ranging from squab to goose and many more. These types of poultry have their own role to play, especially when it comes to the large scale and commercial markets. All these classes can be brought under the 4 basic categories or types of poultry which include:

You may also like to check out types of chicken breeds:

This category consists of various domesticated birds each of which is used in various farm settings. The most common type is the chicken which is used at a number of commercial farms and at homesteads all around the world. The next in line is the turkey, which is used more often for the cuisine and other thanksgiving purposes. Most of the chickens and turkeys are used as a mode of nutrition, while the remaining fragments are used for other purposes.

As the name suggests, this category includes the waterborne birds. One of the most common is the duck which is found almost in all regions and areas of the world. Just like the turkeys, ducks are also used as cuisines and dishes. They are also mixed with a number of flavors and materials, especially when it comes to their use in the hotels and restaurants. Goose, which is also another type of water fowl, is also used for similar purposes. Furthermore, both of them are also being used for the making a number of commercial products and medicines. Not to forget the use of these domesticated animals as edibles.

Now here we have the birds which are undomesticated and are mostly used for the purpose of hunting and thrill. As the name suggests, they are mostly hunted down and then use in various foods. Wild turkey, wild duck, wild goose and the wild pheasant are the types of birds that fall under the category. The thing which differentiates them from all others birds in the list, is the intense flavor for which they are known. Some of these birds also happen to have a much bitter taste, which is primarily due to the wild life settings in which they grow.

Doves and pigeons are the ones that do not fall into the other categories. They are also referred to as the squabs, primarily when they are used for the eating purposes. A number of other larger birds such as the ostrich and emu are also included in this type of poultry. The taste of the larger animals is in a number of ways closer to that of beef, which is one of the prime reasons for which the hunters love to track them down. In comparison to them, the pigeons have a smaller and short tailed body. The doves on the other hand have a thicker body and long beak. All these wild birds vary in their body type and their usage.

My name is Farhan Ahsan,I am web enthusiast, writer and blogger. I always strive to be passionate about my work. I started my work at the beginning of 2007 by engaging myself with detail reading and exchanging information with others. Since then things and times have changed, but one thing remains the same and that is my passion for helping and educating people, building a successful blog and delivering quality content to the readers. The particular interests that brought me in the world of blogging are gardening, wildlife, nature, farming and livestock.
Previous Chicken Eggs Hatching Accessories and suppliers
Next A Guide To Poultry Processing Plants -Top 5 Suppliers